What if you had so much inner coherence that your outer life was always in flow? And if there were snags, always are, you could easily recoup? If you are wanting that in your life, this mini-course is for you.

Groups can powerfully transmute energy – with the synergy of a loving and caring environment of like-hearted people. Join in beginning September 22nd at 8:00 PM EST.

The Chartres Cathedral, located 55 miles from Paris, is a renowned destination. Its early Gothic architecture is unique with its unprecedented quantity of stained glass; 176 windows depicting 5,000 figures, including a beautiful rose window. The Cathedral is dedicated to Mother Mary and, each year, on August 15, the Assumption of Mother, Mary, in the form of the Black Madonna, is gloriously decorated, venerated with two masses, and processed through Chartres. In 2022, I was there during this special occasion as part of the Venus Rising pilgrimage with Ubiquity University. We were 80 students.

In the center of the labyrinth there had once been a round copper plaque; it was removed during the French Revolution, melted down, and turned into bullets. As presented in class, engraved on the plaque was the battle of Theseus and the Minotaur from Greek myth. What I came to understand is that to know the myth is to know the labyrinth.

According to this myth, King Minos of Crete, son of Zeus, had a labyrinth built to hide Minotaur, a monster born out of lust between his Queen Pasiphae and a Cretan Bull. To avenge the death of his son Androgeus, for excelling — try to keep up with the murders and monsters, it is Greek myth after all! — King Minos demanded seven young men and seven young women be sent annually to Crete, to the labyrinth, to be devoured by Minotaur.

This continued until Theseus, son of the King of Athens volunteered to be one of the sacrifices sent to Crete because he intended to kill Minotaur. The great Athenian hero was aided by King Minos’s daughter, Princess Ariadne, who gave Theseus a ball of thread to guide his exit. Though Theseus defeats Minotaur, fate intervenes. When Theseus gloriously sailed into Athens, he failed to take down his ship’s black sails – leaving his father to believe he had been defeated. King Aegeus, overwrought with grief, jumped to his death, into the Aegean Sea.

When the night came to walk the labyrinth, we gathered outside the north doors of the cathedral. One of the nine doors leading into the cathedral was then opened from the inside and we were ushered across the threshold. The door closed behind us. Inside, the lights were low, making the flames of the hundreds of burning votive candles more visible. With reverence came silence and I moved through the cathedral unbound by ritual or protocol.

As I waited to enter the labyrinth, I walked and reflected on what I saw. The magnificent rose window at the Cathedral’s West side is the same diameter as the labyrinth, 42 feet. If the West wall were laid down, the labyrinth and the rose window would be nestled on top of each other. The prominent robin’s egg blues was meant to evoke Mother Mary. The large encasement with the white tunic once worn by Mother Mary miraculously survived a fire in 1194 AD, making the rebuilding of the cathedral fervorous.

Next to the encased white tunic was a metal candle stand. I walked over, paused, and began to light candles in memory of deceased family members, my grandmothers and grandfathers, my father, my brother, and then my daughter, Alexandra. Feeling complete, I remembered the waiting labyrinth.

As I turned, I felt strong presences, as if a long trail of people was following me. Then a loud, strong message, “Do not look back!” The message reminded me of the biblical story about Lot’s wife and I could sense that pillar of salt close beside me.

Nearing the labyrinth, I made note of how to exit the center by watching. Confident I now knew how to enter and exit, I stood in line repeating my mantra, “Don’t look back.” I entered and wove my way around into the center, reflected a few moments, and exited to my one side, as I had seen one of the male faculty do. I continued repeating, “Don’t look back,” “Don’t look back”. The return seemed a bit laborious, and I began to feel lightheaded. It was all taking longer than I had imagined. Seemingly forever long into my return, I noticed I was re-approaching the center. I gasped and felt panic when I had no other choice than to step back into the center.

The most difficult moment was being unable to look back at my mistakes. No rehashing allowed. To make matters worse, I panicked that I may exit wrong again and not get out at all, so I followed another faculty member out. I was now one of only two people still walking the labyrinth. The other 80 people had finished and were standing around its outside circle. I followed the faculty member, albeit his dreadfully slow pace. He was my thread or perhaps the thread was being held by my ancestors – all the while banging me over the head with “Don’t Look Back.” 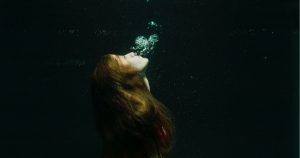 Once together in Chartres, every morning and after breaks, we breathed the 5.5, breathing in for 5.5 seconds and exhaling 5.5 seconds – which takes 5.5 minutes.